K-Five Construction Corporation is an Illinois based construction company that specializes in concrete and asphalt paving. Years ago the company was looking for solutions to manage their fleet when they discovered FleetWatcher. Since integrating FleetWatcher into its operations, K-Five has been able to easily monitor the delivery of materials to and from job sites. This ensures that the company’s production runs as smoothly as possible by allowing it to correct any delays at the plant or paver in real-time. 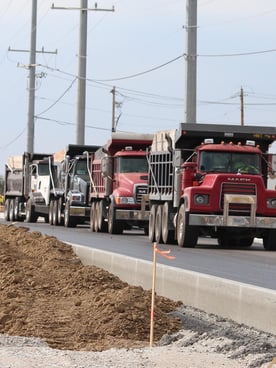 The company has observed how FleetWatcher has shaped its operations and seen the potential for an increase in production and cost savings. After trusting FleetWatcher with it’s equipment division for the past 5 years coupled with the company’s Recent Decision to implement FleetWatcher’s Material Management System & Electronic Ticketing System, K-Five has created a Logistics Operations Coordinator Position. The logistics operations coordinator will act as the company’s official FleetWatcher administrator. Some responsibilities tied to the position include keeping the company’s materials delivery system and virtual shift ticketing up and running throughout the day. The new position will be “taking K-Five to the next level with our use of FleetWatcher, really focusing on enhancing the efficiency of our trucking operations.” The company plans to work alongside the team at FleetWatcher to work out a game plan and ensure continued success.