With over 60 years of experience, Reeves Construction is an award-winning contractor that has served the state of Georgia with several infrastructure and transportation projects. Like most contractors, Reeves was looking for ways to cut costs when they came across FleetWatcher. Before the company joined the FleetWatcher family they realized that they had an issue with over trucking. Jerod Kornn, the project manager at Reeves explained, “Some of the issues that we faced were very high trucking costs, not knowing where the trucks were at, and having to call them on the phone and ask them where they were at. If one of them was broken down you couldn't get in touch with them.” Jerod also went on to explain that there were many instances in which drivers would make careless mistakes and leave tickets at the plant, causing them to have to call the plant later and ask for the tonnage report.

To improve driver behavior, the company has been using automatic deductions on FleetWatcher’s Virtual Shift Tickets (VSTs) for unauthorized stops. This feature sends out alerts anytime a driver makes a stop that is not at an approved location. “When you start holding these drivers accountable and they know that you're watching they start performing the way that they're supposed to be performing. I've seen significant savings on jobs that I deal with as far as the trucking costs,” says Jerod. The company has found that when driver performance is high, it helps limit the number of trucks that are needed on a job. Jerod continued, “It has helped us reduce the number of trucks on the job because now they're performing better which in return is making us perform better.” 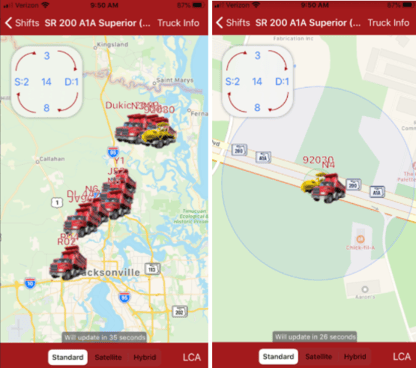 When asked “How does the team like the mobile app?” Jerod commented, “They love it because it gives them pretty much the exact information that they want right then and there. All we've got to do is refresh and it tells you exactly how many loads out and tons out and it will tell them how close the trucks are and what order they're coming in. They really like that.” He goes on to say that the features on the FleetWatcher app are helpful because his team can pull up the location of the trucks and see how many trucks are on their way back. “When he [plant operators] can see how far out the trucks are he can get a good idea of when to start the plant back up and how many trucks he needs to run,” said Jerod.

Lastly, we asked if there have been any jobs in which FleetWatcher was particularly helpful. Jerod responded, “Every single job that we have worked on since we started using those things has been helpful.” The company’s experience with FleetWatcher has resulted in savings of up to a thousand dollars a day by being able to know when to cut the trucks off. Overall, Jerod has been very pleased with the company's performance and looks forward to continuing to improve operations through FleetWatcher's many features.