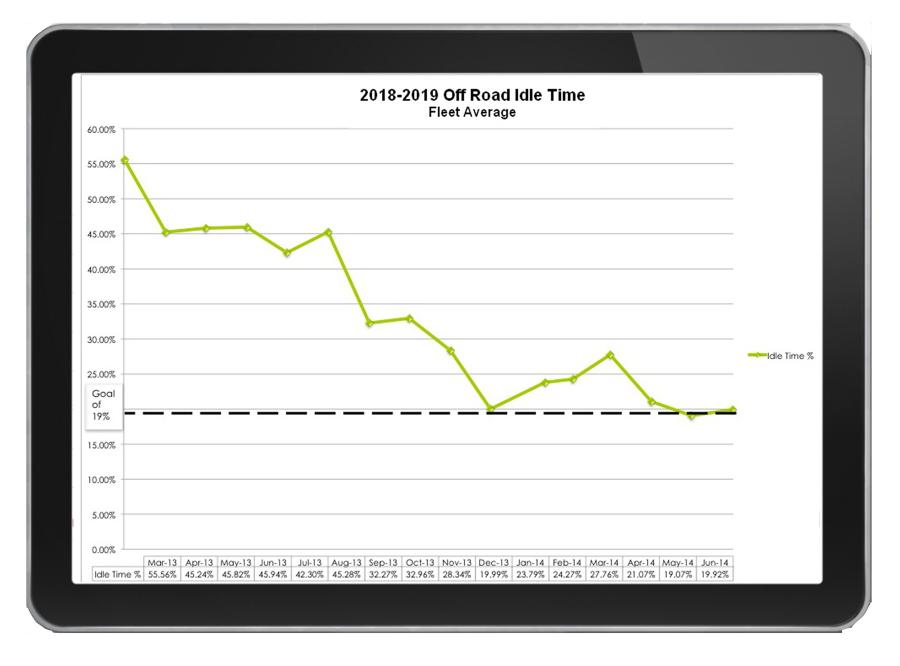 Equipment and operator idle time is a major problem in the construction industry. Industry research indicates that off-road assets average an hour of excessive idle per machine per day, at a cost of roughly $50 per hour (including fuel, services and depreciation). Aggregate that across a fleet and the numbers are staggering.

FleetWatcher's escalating idle alert proactively informs managers when equipment has been idling for too long, allowing immediate corrective action to be taken. This can help slash idle time and thus elongate equipment life span, or dramatically impact its value at trade in.

Twenty-plus years of experience and collecting company data indicates that most companies have fleetwide idle times that average more than 50 percent. This excessive idle time not only wastes fuel, but it also costs companies in lost value including lost production.

Users of the FleetWatcher telematics platform have reported significant reductions in idle time when using the escalating idle alert feature, according to the company.

Unlike factory telematics, which can tell what a machine's RPMs are at a point in time, FleetWatcher monitors the rpm over time, and actively alerts managers with a text or email when a pre-set threshold has been reached.

Users set an excessive idle time threshold and then enter that into the 3rd party telematics platform. When that threshold has been reached, an alert is sent, usually via email or text, to the foreman. If the unit continues to idle, a second alert 5 to 10 minutes later is sent to the foreman, superintendent, maybe also a project manager or equipment manager. If needed, a third alert, also 5 to 10 minutes later, is sent to the boss.

Generally, the problem is resolved, and idling is eliminated, after the first or second alert. The parameters and alerting structure are completely customizable by the user.

Escalating idle alert is just one data collection feature of the FleetWatcher telematics platform. Data can be integrated with other business systems such as accounting, estimating and job cost systems, bringing everything together for a more comprehensive view.

To read the article on Construction Equipment Guide, click here.